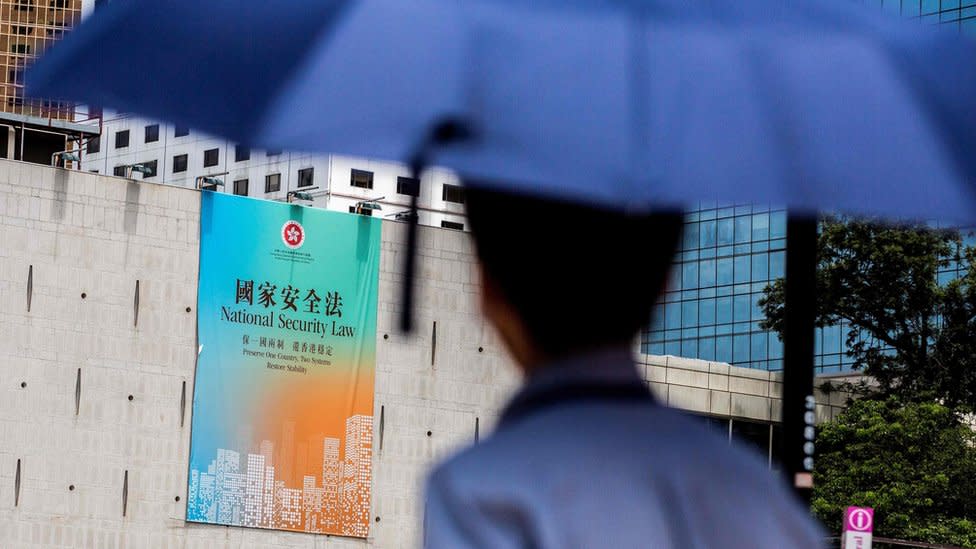 People in Hong Kong could face life in jail for breaking a controversial and sweeping new security law imposed by China.

The legislation came into force on Tuesday but the full text was only revealed hours afterwards.

It was brought in by Beijing following increasing unrest and a widening pro-democracy movement.

The territory was handed back to China from British control in 1997, but under a unique agreement supposed to protect certain freedoms that people in mainland China do not enjoy – including freedom of speech.

Details have been closely guarded and the Beijing-backed politician admitted she had not seen the draft before commenting.

But Ted Hui, an opposition legislator, told the BBC: “Our rights are (being) taken away; our freedom is gone; our rule of law, our judicial independence is gone.”

The UK, EU and Nato have all expressed concern and anger, while pro-democracy groups have started to disband amid fears of immediate reprisals.

Washington, which also urged Beijing to reconsider, had already begun to end the preferential treatment Hong Kong enjoys in trade and travel with the US, bringing it in line with mainland China.

What do we know about the law?

Full details of the new law only emerged after it had come into effect at about 23:00 local time on Tuesday (16:00 BST).

It applies to both permanent and non-permanent residents. Among the details:

The law will not apply to acts which happened before it came into force.

Under the national security law, many of the acts of protest that have rocked Hong Kong over the past year could now be classed as subversion or secession… and punished with up to life in prison.

Fearing repercussions, political activists are resigning their posts and one pro-democracy protester, who asked to remain anonymous, told me that ordinary people are now deleting posts on social media.

One contact of mine, a lawyer and human rights activist, sent me a message shortly after the law was passed. Please delete everything on this chat, he wrote.

What has the reaction been?

The reaction began the moment the law – which was first announced six weeks ago – was signed by China’s President Xi Jinping.

Pro-democracy activists in Hong Kong began to quit immediately, fearful of the new law, and the punishment it allows.

According to the South China Morning Post, pro-democracy businesses began clearing away any sign they had once supported the protests.

Joshua Wong, secretary-general and founding member of pro-democracy group Demosisto, warned the city would “turn into a secret police state”.

“Beijing’s promise to the world that Hong Kong will have a high degree of autonomy is proven to be a lie,” opposition legislator Ted Hui told the BBC’s Newshour programme.

But despite the risks, some remained determined to go ahead with the banned traditional 1 July rally planned for Wednesday, amid reports of large numbers of police descending onto Hong Kong’s financial district.

The move also provoked international reaction, with the UK’s Foreign Secretary, Dominic Raab, saying China had broken the promises it had made to the people of Hong Kong under the terms of the 1997 handover.

He added that the government “fully” intends to see through plans to change visa rules, offering millions of people in Hong Kong a way to acquire UK citizenship.

That agreement enshrined the “one country, two systems” principle in a document called the Basic Law – Hong Kong’s mini constitution – for 50 years.

The Basic Law protects rights such as freedom of assembly and freedom of speech – neither of which exist in mainland China – and also sets out the structure of governance for the territory.

Julian Braithwaite, Britain’s ambassador to the United Nations in Geneva, told the UN Human Rights Council that the law “has clear implications for human rights”.