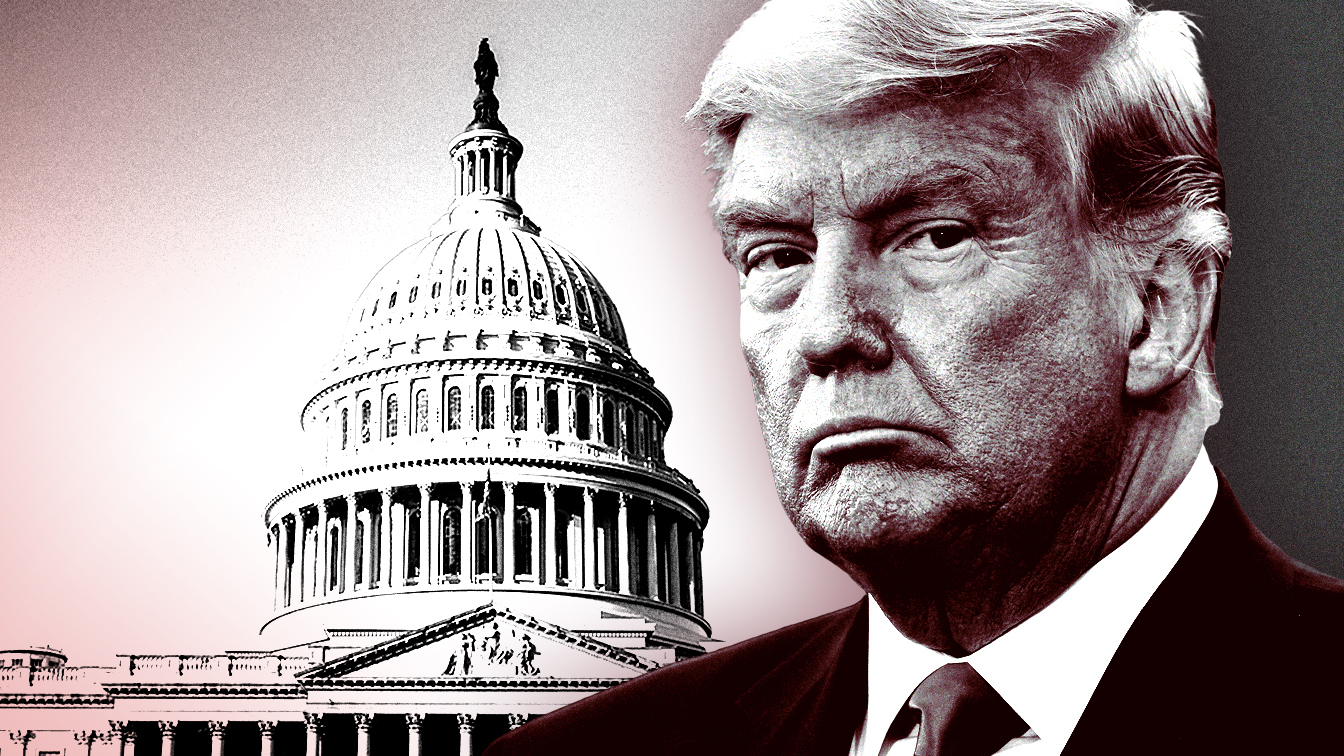 The House of Representatives voted Wednesday to impeach President Trump on charges of “incitement of insurrection” for his role in the Jan. 6 siege of the Capitol building by his supporters that left five people dead.

Before Wednesday, no U.S. president had ever been impeached twice.

The impeachment article was passed by a vote of 232-197, with 10 Republicans joining the Democrats in the chamber.

Under the Constitution, the next step would be a trial in the Senate, which could result in his removal from office. But with just a week left in his term, the issue appeared to be moot — although nothing is certain in the head-spinning developments that have engulfed Washington, D.C., since Trump was defeated in the presidential election on Nov. 3.

The article of impeachment charged that Trump “gravely endangered the security of the United States and its institutions of Government,” by promoting false election fraud claims, seeking to illegally manufacture a different election outcome, and by inviting his supporters to attend the Jan. 6 rally in Washington that turned violent.

“He threatened the integrity of the democratic system, interfered with the peaceful transition of power, and imperiled a coequal branch of Government,” the impeachment article stated. “He thereby betrayed his trust as President, to the manifest injury of the people of the United States.”

House Speaker Nancy Pelosi said in a speech on the House floor that the aim of the pro-Trump mob was to “overturn the duly reported will of the American people,” and laid blame at the feet of the president.

“We know that the president of the United States incited this insurrection, this armed rebellion against our common country. He must go,” Pelosi said.

Unlike the almost entirely party-line vote on Trump’s first impeachment in the House on Dec. 18, 2019, on charges of obstruction of justice and abuse of power, the president could not portray the House vote as simply a partisan exercise. Republican Reps. Liz Cheney of Wyoming, Peter Meijer and Fed Upton of Michigan, Adam Kinzinger of Illinois, David Valadao of California, John Katko of New York, Anthony Gonzalez of Ohio, Tom Rice of South Carolina, and Jaime Herrera Beutler and Dan Newhouse of Washington all voted in favor of impeachment.

“A vote against this impeachment is a vote to validate the unacceptable violence we witnessed in our nation’s capital. It is also a vote to condone President Trump’s inaction,” Newhouse said in a statement released as Congress debated impeachment. “He did not strongly condemn the attack nor did he call in reinforcements when our officers were overwhelmed. Our country needed a leader, and President Trump failed to fulfill his oath of office.”

Even some of the Republicans who voted against impeachment acknowledged that Trump shouldered at least some blame for the unrest last week.

“The president bears responsibility for Wednesday’s attack on Congress by mob rioters,” House Minority Leader Kevin McCarthy said. After McCarthy had challenged the Electoral College certification at the center of the insurrection at the Capitol, he also signaled for the first time that Trump had lost.

“Joe Biden will be president,” McCarthy said, “because he won the election.”

As the vote was taking place, Trump released a statement about reports of further protests that the FBI and the Justice Department warned Tuesday could involve further violence.

“In light of reports of more demonstrations, I urge that there must be NO violence, NO lawbreaking and NO vandalism of any kind,” Trump staid in a written statement. “That is not what I stand for, and it is not what American stands for. I call on ALL Americans to help ease tensions and calm tempers. Thank you.”

Rep. Jim Jordan, R-Ohio, read the statement on the House floor moments after it had been released.

Another striking difference between the two impeachment votes was apparent just outside the House chamber, where thousands of U.S. National Guard troops were posted to protect the Capitol from threats by Trump supporters aimed at the Biden’s Jan. 20 inauguration.

Such a buildup of troops at the Capitol had not been witnessed in Washington since 1861, when seven Southern states seceded from the Union, precipitating the Civil War.

Before Wednesday’s vote, Rep. Cheney, the third most powerful Republican in the House, issued a forceful declaration in favor of impeaching Trump.

With news reports swirling Tuesday night that Sen. Majority Leader Mitch McConnell favored convicting Trump on the incitement of insurrection charge and removing him from office, more House Republicans stepped forth to announce that they would also vote to impeach the president.

But on Wednesday, Trump’s Republican supporters moved to punish Cheney for what they saw as her betrayal of the president. Rep. Jim Jordan, R-Ohio, said he would seek a vote to remove Cheney from her position as House Republican Conference Chair.

With just seven days remaining before Biden is set to be inaugurated, the Senate has little time to debate Trump’s removal. Since the U.S. Constitution mandates that a two-thirds majority in the Senate is required to remove a president, at least 17 Republicans and every sitting Democrat would need to vote in unison to do so.

Republican Sens. Lisa Murkowski of Alaska, Pat Toomey of Pennsylvania and Ben Sasse of Nebraska have all stated that they would vote to convict Trump and remove him from office. Reports circulated on Wednesday that as many as 20 Republican senators might vote in favor of conviction.

Senate Majority Leader Mitch McConnell holds the key to what happens next, and minutes after the House voted to impeach Trump he released a statement signaling that the Senate would not take up the impeachment article until after Trump has left office.

“Given the rules, procedures, and Senate precedents that govern presidential impeachment trials, there is simply no chance that a fair or serious trial could conclude before President-elect Biden is sworn in next week,” McConnell said in the statement. “The Senate has held three presidential impeachment trials. They have lasted 83 days, 37 days, and 21 days respectively. Even if the Senate process were to begin this week and move promptly, no final verdict would be reached until after President Trump had left office. This is not a decision I am making; it is a fact. The President-elect himself stated last week that his inauguration on January 20 is the ‘quickest’ path for any change in the occupant of the presidency.”

McConnell and Trump, who worked closely for Trump’s entire term, have fallen out over the president’s disruptive antics since the Nov. 6 election, which McConnell reportedly believes cost the Republicans two Senate seats in Georgia, reducing McConnell to minority leader for at least the next two years. At one point, reports circulated that McConnell was open to allowing a vote to convict Trump.

As the House debated whether to impeach Trump, McConnell sent a letter to his Senate colleagues indicating he had not decided on the matter of convicting the president.

“While the press has been full of speculation, I have not made a final decision on how I will vote and I intend to listen to the legal arguments when they are presented to the Senate,” McConnell said in his letter.

But convening a trial before Jan. 19, when the Senate is scheduled to return to session, would require a declaration of a national emergency by the two Senate leaders, McConnell and Minority Leader Chuck Schumer, D-N.Y. Before the House even voted on Wednesday, McConnell had rebuffed Schumer’s call for an emergency session.

In a statement following the House vote, Schumer, who will not become Senate Majority Leader until after Vice President-elect Kamala Harris is sworn in on Jan. 20, seemed to accept McConnell’s rationale.

A lifetime ban on running for office would effectively end whatever hopes Trump might have of running for president again in 2024.

Wednesday’s vote to impeach Trump came the day after the House passed a resolution calling on Vice President Mike Pence to invoke the 25th Amendment in concert with the president’s cabinet to oust Trump from office.

In a Tuesday night letter to Pelosi, Pence declined to do so.

“I do not believe that such a course of action is in the best interest of our Nation or consistent with our Constitution,” Pence said in the letter, adding that invoking the 25th Amendment “would set a terrible precedent.”